In this lecture, we will focus on decomposing our system into individual classes and functions.

In structured programming, such as languages like C and Javascript, we use Functional Decomposition, where we decompose high-level general functions into lower and lower level functions, each of which performing a more and more specific task. Typically, we think of our functions being executed like a depth-first search in this way.

Each software module should have one, and only one, reason to change

Consider the following partial class with some selected methods entered:

This class feels awkward, like it is doing too much. That’s because it is! Think of what human-beings using the software are using this class for:

Think of the reasons, however, that this class could change:

In short, there’s a lot of different reasons this class can change. This means that this class is violating the Single Responsibility Principle. As a hint, the use-case of each of the roles mentioned describes a functional module. Using that, we can break this class up:

Now, each of these classes has one responsibility. Yes, each of these classes is heavily dependent on Student, but that was still they case when they were all one-class. The key, however, is that if the software engineer receives a request to change a feature related to GPA calculation, they now know the primary class that they are working from. And because GPACalculation is encapsulated from Student, the developer for GPACalculator is significantly less likely to make changes that could break the other two use-cases. 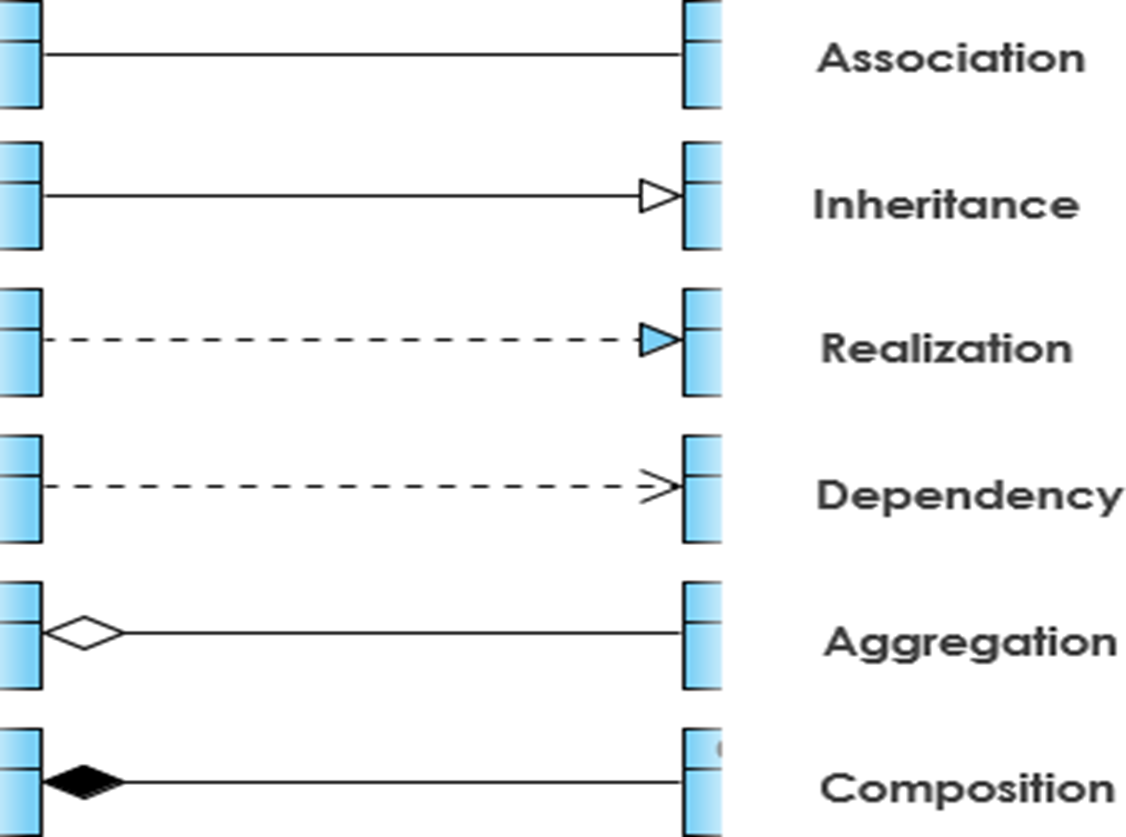 There are 4 kinds of class relationships we will focus on.

This is when one class has another instance(s) of another class as a field(s). For example:

In the above case, Car aggregates tires.

The different between aggregation and composition is subtle. In composition, we are saying “one thing is composed of” another. For example, I am composed of a skeleton, muscles, etc. They are generally not separable entities (or at least, not meaningfully separable). By contrast, aggregation often implies an impermanent ownership where one class. For example, a Library Patron may check out a book, then adding the data of the book to a List<Book> called checkedOut. But the patron isn’t composed of books, they simply have some books (aggregation).

When drawn in a diagram, the diamond is on the owner’s side.

Association is when A is associated with B in some semantic way that implies a bidirectional relationship (That is, A is aware of B, and B is aware of A). For example, “Student enrolls in class”. At a code level, this can take the form of something like a mutual aggregation (although that isn’t explicitly required). For example, a Student enrolls in a Course - I would want to, from the Student access their set of Course objects, and from a Course, I would want to access a set of Student objects. This might look like:

Dependency implies a one-directional association. For example, class A uses class B, however Class B is unaware of Class A. An example might be something like: